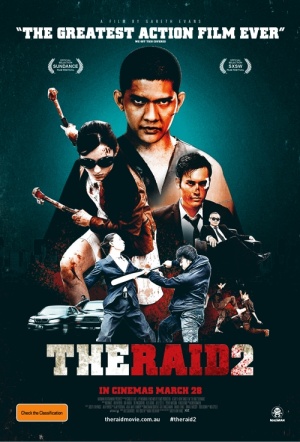 Sequel to 2011’s intense martial arts and action epic sees writer-director Gareth Evans and star Iko Uwais return, widening the scope of the original into an ambitious, ass-kicking underworld epic. After making it through The Raid almost unscathed, a young cop goes undercover to take down Indonesia’s most vicious crime bosses.

Shortly after the events of the first film (in which police raid an apartment block, home to the deadliest gangsters and drug lords in Jakarta’s criminal underworld), young cop Rama (Uwais) is one of the few survivors of the preceding carnage. With crime syndicate retaliation against his family on the horizon, Rama agrees to have his name added to the list of casualties and goes undercover to bust the city’s worst gangsters. Quickly finding himself in over his head, Rama is forced to bring all his considerable fighting skills to bear and compromise his morals in order to maintain his cover – a predicament that lasts for years and through brutal situations including a prison riot, epic car chase and an encounter with a deadly hammer-wielding young lady. As Rama finds himself deeply entrenched within a mob outfit, a gangland power struggle erupts into violence and he’s forced to take on overwhelming odds to survive.

“A masterclass in economical filmmaking” is what we said about The Raid back in 2011. An instant classic, the film didn’t work within its limitations so much as thrive on them, shrinking plot, character development and setting to the bare minimum - without sacrificing them - and then going for broke. It’s a risky move by director Gareth Evans to move on from ruthless efficiency and aim to make everything bigger and better with The Raid 2: Berandal. Fusing its predecessor’s action with undercover cop and underworld crook machinations, the result is a crime saga with the frequently jaw-dropping fight scenes you’d expect.

Never quite generates or sustains its predecessor’s pure sense of menace.

No other filmmaker on the planet can touch Evans for long-take beatdowns and wildly inventive flourishes.

Hyper-violent it may be but there is beauty in its brutality.

The film suffers from too much potential.

An even more masterful jolt of high-energy genre filmmaking.

This is how it’s done — a clean, hard, constant hit of adrenalin. If it’s not the best action movie of the year, we’ll eat a fridge.