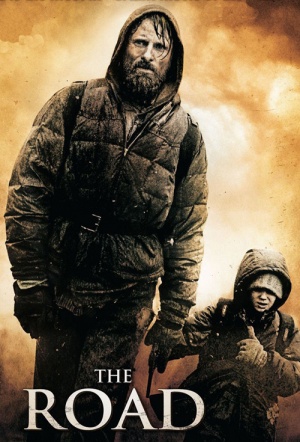 Viggo Mortensen leads an all-star cast for this post-apocalyptic tale about an unnamed man (Mortensen) and his son (Kodi Smit-McPhee from Romulus, My Father) travelling across an ash-covered American landscape, left in tatters by an unspecified monstrous cataclysm some years before. Most of the planet's life and civilization  has been destroyed, and what's left isn't very friendly.

This is from John Hillcoat, director of gritty Outback western The Proposition, and an adaptation of an unrelenting Cormac McCarthy (No Country for Old Men) novel.

Except for the physical aspects of this bleak odyssey by a father and son through a post-apocalyptic landscape, this long-delayed production falls dispiritingly short on every front.

Prepare yourself for a particularly depressing end of the world.

Engrossing and at times impressive, a pretty good movie that is disappointing to the extent that it could have been great. Is this the way the world ends? With polite applause?

Director John Hillcoat has performed an admirable job of bringing Cormac McCarthy's Pulitzer Prize-winning novel to the screen as an intact and haunting tale, even at the cost of sacrificing color, big scenes and standard Hollywood imagery of post-apocalyptic America.

One of the most chillingly effective visions of the world’s end ever put on screen -- and a heart-rending study of parenthood, to boot.

If there was ever a book that would have collapsed horribly upon itself if it was buggered about with too much, The Road is that story. The novel is Pulitzer Prize-winning brilliant, and author Cormac McCarthy (No Country for Old Men) is a rare and special assembler of the English language.

The Road evokes the images and the characters of Cormac McCarthy's novel. It is powerful, but for me lacks the same core of emotional feeling.