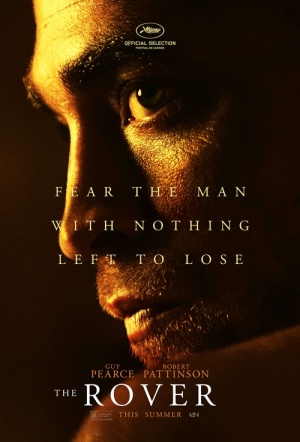 Set in the Australian desert in a dangerous near future, director David Michôd's follow-up to Animal Kingdom starring Guy Pearce. Eric (Pearce), the victim of a gang of robbers who've stolen all his possessions, sets off to track them down with the help of Reynolds (Robert Pattinson), an injured member of the gang who they've left behind. Co-written by Animal Kingdom actor Joel Edgerton.

David Michôd is not a warm and fuzzy director. The Animal Kingdom writer-director is more warm and sticky - in the sense of blood, the kind spilled impressively in his films.

Isn’t exactly something we’ve never seen before, but it has a desolate beauty all its own, and a career-redefining performance by Robert Pattinson.

There's a purity to the utter lack of rationale here; this, combined with Michôd's way with a landscape, makes for a passable guy-picture masquerading as something deep.

Michôd creates a good deal of ambient menace in The Rover; Pearce has a simmering presence. But I felt there was a bit of muddle...

Dark and engaging, with superb use of the heart-stopping landscape around the Flinders Ranges, but it could be accused of mannerism.

The desolate parable of brooding outback justice plays out as though Cormac McCarthy has reimagined Mad Max 2 for the 21st century, with late-model cars and breathable-fibre costumes.

Pearce... gives all the cold-hearted remorselessness of a classic Western or film noir anti-hero who refuses to die before exacting vengeance for an unpardonable crime.

Where Animal Kingdom kept dragging us towards its dark, dead centre - often against our will - The Rover just warns us to keep our distance and leaves it at that.