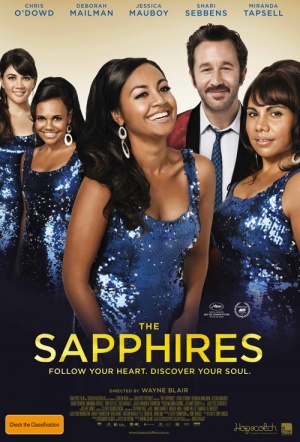 True-story Australian comedy, set to a soul music soundtrack, following four Aboriginal women discovered by a talent scout (Chris O’Dowd, Bridesmaids) who form a musical group and travel to Vietnam to perform for troops. Adapted from the hit play of the same name, itself inspired by the story of writer Tony Briggs' mother.

Dave (O’Dowd) is no great musician but he knows talent. Determined to find Australia’s answer to The Supremes, he discovers sisters Cynthia and Gail singing country and western in a local talent contest. He persuades them to switch to soul and form The Sapphires with younger sister Julie and cousin Kay. Soon they’re on their way to South East Asia, singing tunes made famous by Otis Redding, Marvin Gaye and The Four Tops.

The Sapphires is glossy and often silly, but it's zippy enough to make the tour worthwhile.

It is a film with a way of disarming your critical faculties.

All shortcomings are invariably forgiven whenever the hyper-talented Mauboy gets near a microphone, and the film's winning selection of soul standards and original tunes fire up.

Feel-good Australian cinema, packed with laughs and soul (both kinds).