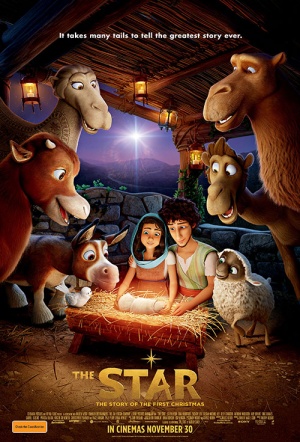 A small but brave donkey named Bo (Yeun) yearns for a life beyond his daily grind at the village mill. One day he finds the courage to break free, and finally goes on the adventure of his dreams. On his journey, he teams up with Ruth (Bryant), a lovable sheep who has lost her flock and Dave (Key), a dove with lofty aspirations. Along with three wisecracking camels and some eccentric stable animals, Bo and his new friends follow the Star and become accidental heroes in the greatest story ever told - the first Christmas.

"The Star" delivers a fresh take on a story that its Christian target audience presumably knows by heart, emphasising such qualities as faith, friendship and teamwork in the process.

Unless you have tiny, religious children, it's probably best to avoid it.

It's reasonably lively, and not impious (if you ask me), but set against the best cartoons, it's not the greatest story ever told.

Delivers ... a preachy, bland and fastidiously inoffensive kind of ersatz fun - a little like those knock-off Christian video games from the early 1990s that mimicked existing hits, but which made you pray for people instead of shoot them.

Some future shelf life in seminaries seems likely, but as festive treats for kids go, it's like asking for a selection box and being force fed communion wafers instead.

A Biblical variant on Ice Age...

While the movie never soars or burns especially bright, it delivers a modicum of magic without getting pious or gushy.