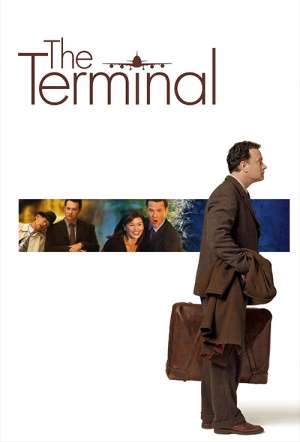 Viktor Navorski (Hanks) is a man without a country; his plane took off just as a coup d'etat exploded in his homeland, leaving it in shambles, and now he's stranded at Kennedy Airport, where he's holding a passport that nobody recognises. While quarantined in the transit lounge until authorities can figure out what to do with him, Viktor simply goes on living – and courts romance with a beautiful flight attendant.

It's an odd fable: Viktor is the mysterious visitor who shows us what the American Dream is all about-in the movie's terms, compassion for others - without ever wanting to become an American himself.

Spielberg does not appear to take himself or the material too seriously, and his steadfast refusal to see the proverbial glass as less than half-full is more inspiring than cloying.

Rarely have I been so acutely aware of a movie's softness and sentimentality, and rarely have I minded less.

Even the best of talents misfire. Here's Exhibit A.

A sweet and delicate comedy.

Far less cuddly than expected, this unusual and elegant movie may have failed to connect with US audiences but it proves Spielberg is currently the most unpredictable director in Hollywood.