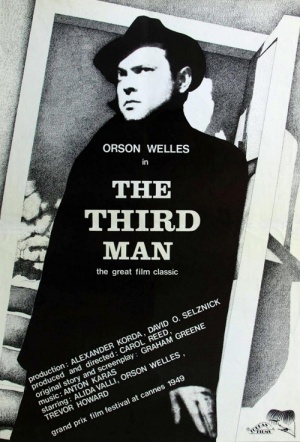 Considered one of film's greatest thrillers, this British mystery follows an American pulp novelist (Joseph Cotton) who travels to shadowy post-WWII Vienna and becomes embroiled in an investigation into the murder of his friend and back-market purveyor, Harry Lime (Orson Welles). Grand Prize winner at Cannes 1949, and Best Cinematography winner at the Oscars for its expressionist, black and white photography. The Third Man was named the best British film of the 20th Century by the British Film Institute in 1999.

Suffused with irony yet ultimately serious-minded: without personal responsibility, it says, there is no hope for civilisation – however charming the smirk.

Top credit must go to Mr. Reed for molding all possible elements into a thriller of superconsequence.

Of all the movies I have seen, this one most completely embodies the romance of going to the movies.

This will haunt you.

An iconic film noir that's still fresh despite being familiar.