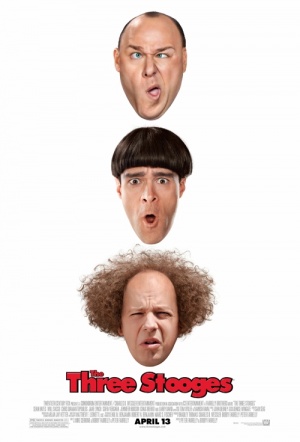 The Farrelly Brothers (Dumb and Dumber) reboot the legendary trio of buffoonery. While trying to save their childhood orphanage, Moe, Larry and Curly inadvertently stumble into a murder plot and wind up starring in a reality TV show.

So why bother with this earnest but imperfect impersonation when the original artists are readily available on VHS and DVD?

Peter and Bobby Farrelly's thoroughly enjoyable paean to Moe, Larry and Curly and the art of the eye poke.

The Stooges were always better in short doses. And 90 minutes of PG nyuk-nyuk-nyuk can seem like an eternity.

I didn't laugh much. I don't think the Stooges are funny, although perhaps I might once have. Some of the sight gags were clever, but meh. The three leads did an admirable job of impersonation. I think this might be pretty much the movie Stooges fans were looking for.

There's just some great imitations of what remains an acquired taste.

The Three Stooges isn't very funny, but it is, like last year's far superior The Muppets, a sincere act of fandom on an epic scale.