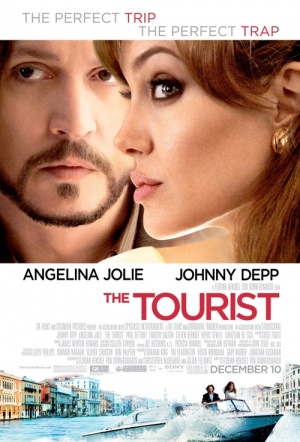 Johnny Depp and Angelina Jolie star in this thriller, billed as "a web of intrigue, romance and danger" set against the backdrop of Paris and Venice. From the director of 2007 Oscar winner The Lives of Others.

During an impromptu trip to Europe to mend a broken heart, Frank (Depp) unexpectedly finds himself in a flirtatious encounter with Elise (Jolie), a woman who deliberately crosses his path. Frank pursues the potential romance but soon finds himself the pursued, as he and Elise are unwittingly thrust into a deadly game of cat and mouse...

A movie that falls down on every level.

The Tourist is like a beautifully decorated shop window - with no shop behind it.

Do anything. Arrange an appointment in Sumatra. Go to the moon. At all costs stay away.

A waxworks version of chemistry.

Like a beautifully tailored suit that starts to smell funny after a few minutes, this sumptuous but stultifying lark sets up a quasi-Hitchcockian intrigue between two strangers abroad, but smothers any thrills or sparks in a haze of self-regard.

Hot stars in a hot spot - but this Tourist is a trap, striving to conjure a mood of suave romanticism but feeling rushed, harried and workmanlike.

Jolie never ignites, and neither does the movie. Mr. Depp doesn't fare better with a role that forces him to play meek and disappointingly mild, despite a few screenwriter-supplied tics.

There's a way to make a movie like The Tourist, but Florian Henckel von Donnersmarck doesn't find that way.

Staggeringly misjudged in virtually every department, from the wannabe effervescent script to Johnny Depp's dopey hairdo.

If you just want to look with admiration and Johnny and/or Angelina – and why wouldn't you? – this offers the full scenic tour, but it's one of those frustrating almost-good films which never really catches fire.