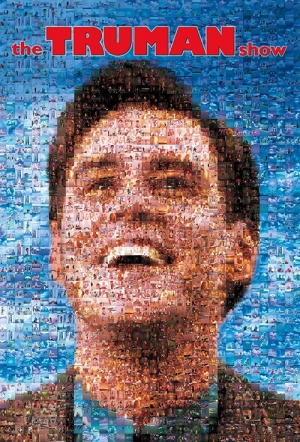 Everything in the life of Truman Burbank (Carrey) is part of a massive TV set. Executive producer Christof (Ed Harris) orchestrates "The Truman Show," a live broadcast of Truman's every move captured by hidden cameras. Cristof tries to control Truman's mind, even removing his true love, Sylvia (Natascha McElhone), from the show and replacing her with Meryl (Laura Linney). As Truman gradually discovers the truth, however, he must decide whether to act on it.

A gemlike picture crafted with rare and immaculate precision...

One movie you can pronounce a modern classic with absolute confidence.

The latter part of the film, depicting Truman's rebellion and providing him with a perfect final line, is much more conventionally conceived than its splendid start.

Peter Weir's film is so cleverly conceived and brilliantly executed that it almost seems like a fresh thought. And even if it doesn't, it nevertheless forms the basis of a very witty exercise.

The underlying ideas made the movie more than just entertainment. Like Gattaca, the previous film written by Niccol, it brings into focus the new values that technology is forcing on humanity.