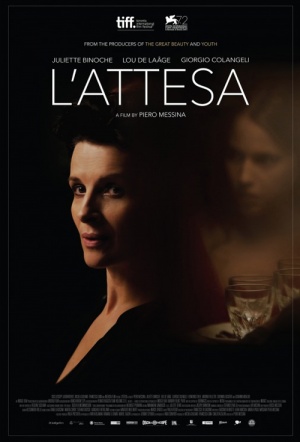 In Italian director Piero Messina's debut film, Oscar winner Juliette Binoche stars as a mother who unexpectedly meets her son's fiancée at a villa and gets to know her as she waits for her son to arrive. Messina's first effort garnered him three awards at the 2015 Venice Film Festival.

"In the vast rooms of an ancient villa marked by the passing of time, Anna (Binoche), following an unexpected bereavement, spends her days in solitude... Unexpectedly, Jeanne (Lou de Laâge) arrives, a young woman who says she is the girlfriend of Anna’s son, Giuseppe. He has invited her spend a few days’ holiday together. Anna is unaware of Jeanne’s existence. And Giuseppe is not there. But all of his things are in his room. Soon he will be back, says Anna, unable to reveal the unspeakable truth. As the days go by, the two women slowly get to know each other and together they begin waiting for Easter Day, when Giuseppe will finally come home and there will be a great traditional procession in the village." (Venice Film Festival)

A mother's grief at the loss of her son underlies this cinematically dazzling debut, though a surfeit of style and too many unanswered questions keep auds at arm's length.

The lead actresses, like the story, work in subtle ways. There’s plenty of potency in small gestures, anecdotes and shared glances.

The performances are vivid and moving, but there is ultimately less to this well-made, impeccably acted film than meets the eye. Its meticulousness is to some degree a flaw, an evasion of nearly every variety of human messiness.

The film is well crafted and consummately acted, but it's all pretty hollow.

The film is a moody and lyrical contemplation of grief and the connections that can be found within the void of loss.