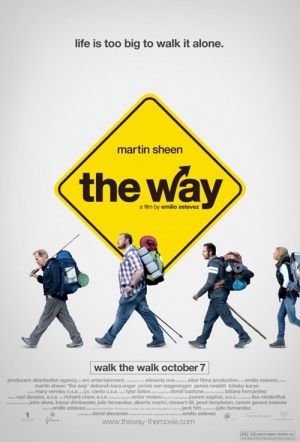 Drama, written and directed by actor Emilio Estevez, about a group of people walking The Camino – a Christian pilgrimage route to Galicia, Spain. Stars Estevez's dad, Martin Sheen (The Departed).

Tom (Sheen) is an American doctor who trips to France following the death of his adult son (Estevez) who died during a storm while walking to the Cathedral of Santiage de Compostela in Spain – a pilgrimage known as The Camino or The Way of St. James. Travelling to retrieve the body, Tom decides to take the same route as his son to deal with his grief. On the way, he meets and travels with others from around the world.

Represents exactly the type of chicken-soup project that inspires once-a-year ticketbuyers to leave their homes and seek out a good movie -- the sort without sex, drugs or swearing. Bring an Oprah-like endorsement onboard, and they've got it made.

Since when did walking become a spectator sport? Give Mr Sheen his due though – he invests a long journey with heart and sole.

The beauty of the movie, in fact, is that Mr. Estevez does not make explicit what any of them find, beyond friendship. He lets these four fine actors convey that true personal transformations are not announced with fanfare, but happen internally.

Estevez keeps his touch light, with a minimum of pedantry. The Way is really a gift from this son to his father. Sheen, gradually revealing a man painfully getting reacquainted with long buried feelings, who gives the film its bruised heart.

It's a sweet and sincere family pilgrimage, even if a little too long and obvious. Audiences seeking uplift will find it here.

Estevez treats the drama with a straight-faced, utterly earnest approach with dual respect for the material and the audience's awareness of how it can go wrong. By playing it straight, The Way never goes off the deep end.

An earnest film, its heart always in the right place, but it's severely under dramatized.

There's a contemplative loveliness to The Way, an affecting personal project both for Emilio Estevez, who wrote, directed, and plays a small role, and for his father, Martin Sheen.

Gentle, likable and profoundly touching, it makes you want to dig out the hiking boots and make the same journey.

Essentially, The Way starts out as "Eat Pray Love" and takes a long, surprising trip toward becoming David Lynch's "The Straight Story." And that's a longer trip than a mere monthlong trek across Spain.