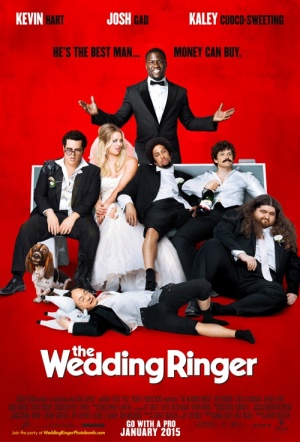 Kevin Hart (Ride Along), Josh Gad (Thanks for Sharing) and Kaley Cuoco (TV’s The Big Bang Theory) star in this comedy from first-time feature director Jeremy Garelick (writer of The Break-Up) about a loser with no friends who hires a guy to pose as the best man for his upcoming wedding.

Lacking a best man, Doug (Gad) is steered in the direction of a professional (Hart) who assembles a team of fake groomsmen, without the knowledge of Doug's fiance Gretchen (Cuoco) - luckily, since her seven bridesmaids are the motivation for at least one of the stand-ins to attend the wedding. As the couple's big day approaches, Doug finds himself moving heaven and earth in an attempt to keep his hair-brained scheme on track and under wraps.

I go into every movie trying to like it. I have a very low comedy threshold. I like Kevin Hart. I lamented Ride Along going straight to DVD in this country. I rented it and enjoyed it. I like Josh Gad. He was good in the underrated sex addiction movie Thanks For Sharing. I can easily get onboard with a ridiculous movie conceit.

Increasingly smacks of desperation as it approaches its big-day climax.

Takes the shortest route whenever possible, which usually means a gratuitous insult.

The film’s lazy reliance on distraction extends to keeping its female lead underwritten and unsympathetic.

Too often the filmmakers go for cheap shots.

One insidious issue with the film though is its repulsive chauvinism.