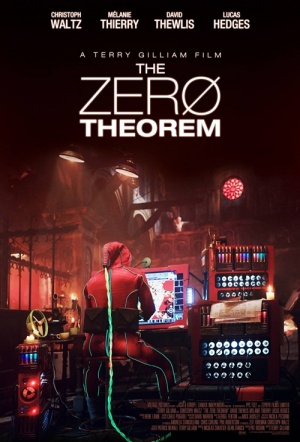 Terry Gilliam's (Brazil) dystopian sci-fi, set in a future London, with Christoph Waltz as an eccentric and reclusive computer genius plagued with existential angst and working on a project aimed at discovering the meaning of life - or the lack thereof.

"Qohen (Waltz) lives in isolation in a burnt-out chapel, waiting for a phone call which he is convinced will provide him with answers he has long sought. His project has been delegated to him by Management (Matt Damon). But his solitary is disturbed by visits from the flirtatious Bainsley (Mélanie Thierry), and Bob (Lucas Hedges), Management’s wunderkind son. Yet it is only once he experiences the power of love and desire that he is able to understand his very reason for being." (Austin Fantastic Fest)

Ends up dissolving into a muddle of unfunny jokes and half-baked ideas, all served up with that painful, herky-jerky Gilliam rhythm.

A candy-coloured paranoid nightmare: not quite Gilliam's best, but still the most satisfying movie he's made for years.

A lo-fi, future-tech farce with an air of high-end cyber panto.

A Phil-Spector-type wall of zane. But The Zero Theorem basically defeated me.

Gilliam is so busy shaping every visual element that his female lead has about as much depth as one of his clever props. Has an air of furious invention that cannot quite mask a disappointment with the world...

Something of a roller coaster and fairly bumpy, the ride is the problem here.

It's the tangle of workings-out not the easy answer that are the proof of a theorem, and that magnificent, sparkling, insightful chaos abounds here.