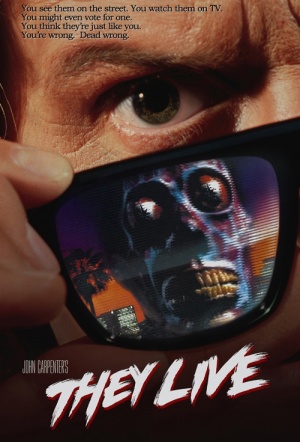 John Carpenter’s subversive action-sci-fi follows John Nada (WWF wrestler Roddy Piper), a drifter who finds a pair of truth-revealing sunglasses. What he discovers is that Earth has been covertly taken over by ugly-looking aliens who have turned advertisements and other media into subliminal propaganda tools (injecting the word 'Obey' with massive amounts of pop-cultural relevance). Nada takes up arms against the aliens, and along the way finds time for a five-and-a-half minute fistfight with co-star Keith David that Rotten Tomatoes ranks seventh on their list of the 20th Greatest Fight Scenes Ever.

A fantastically subversive film, a nifty little confection pitting us vs them, the haves vs the have-nots.

Credibility isn't the problem... but execution is.

Behold the message as articulated by John Carpenter's sublime sci-fi opus: "I'm giving you a choice: Either put on these glasses, or start eating that trashcan."

Suggests, with grim, knowing wink, the joke may be on us.