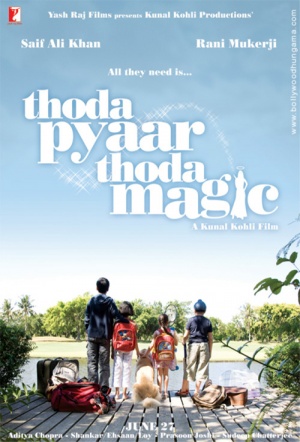 Ranbeer Talwar (Saif Ali Khan), one of the country's top industrialists, is a loner, not out of his free will but just because he lost everyone he ever loved. In a traffic accident he causes the death of the parents of four children; in a very unusual court verdict, the judge decides that he has to look after the four orphans, two boys and two girls.

The orphans hate him for causing their parents' death and want revenge. They do not want to live with him and make that quite evident, so their life together is very unhappy. One day they pray to God (Rishi Kapoor) for help, who helps them: he sends his most mischievous, childlike, lovable angel to the rescue, with a mission to bring Ranbeer and the kids together as a family.

Geeta (Rani Mukerji) comes cycling down a rainbow and bursts into Ranbeer's house as the self-proclaimed new nanny. She is taken in quite reluctantly by the kids and Ranbeer but with the help of some magic proves to be successful in her mission as each of the kids eventually begins to warm up to Ranbeer. Also Geeta and Ranbeer fall in love with each other. Having succeeded in her mission, Geeta has to return to heaven and leaves the family. However, she wants to stay on Earth and return to the family, which she is at last allowed to do, and she reunites with the family who were sad about her departure.
2008145 minsIndiaHindi
Kids & FamilyBollywood & Indian Cinema