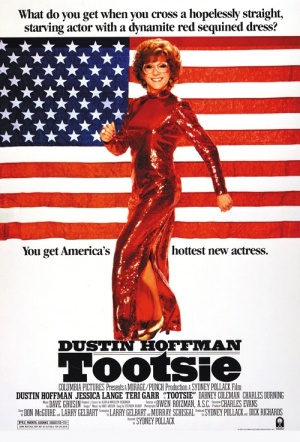 Dustin Hoffman is Tootsie, the female creation of a long-struggling unemployed actor who pulls off the con to win a role on a daytime TV show. Co-stars director Sydney Pollack, Bill Murray and Jessica Lange.

The tone is quick-witted and appealing, with some of the smartest dialogue this side of Billy Wilder.

Restores the original meaning to the term 'situation comedy,' free of the pejorative associations that have accrued over the years because of the glut of awful ones on television.

It turns out to be a touching love story... so touching that you may be surprised how moved you are at the conclusion.

A sparkling turn by Hoffman and an absolutely fabulous cast make this a risk -- and a risque -- success.

It's jaunty, witty, and somehow satisfying despite being simple.