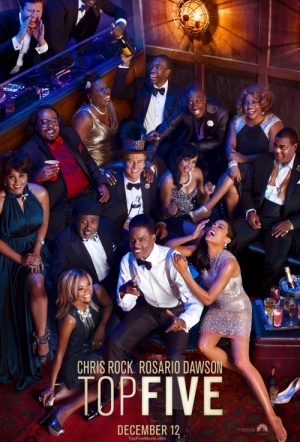 Celebrity comedy written, directed by and starring Chris Rock. The story of a New York stand up turned film star who, disillusioned with his dumb franchises and unsophisticated output, attempts to reinvent himself. Co-stars a bevy of comedians including Kevin Hart, Tracy Morgan, Cedric the Entertainer, J.B. Smoove, Jerry Seinfeld and Adam Sandler.

"Allen, a successful comedian and movie star who, having had his work recently savaged by a New York Times critic, is now in need of a hit. His fiancé (Gabrielle Union) wants him to help boost her reality TV show, while his agent, played by the rocket-fuelled Hart, tries to guide him to the next blockbuster. But what Andre really wants to do is make a serious, important film about the Haitian revolution. So he lets the Times back into his life, hoping to revitalise his image with a profile written by a whip-smart, irresistible journalist (Rosario Dawson). It's the beginning of a beautiful sparring match..." (Toronto International Film Festival)

A lost-artist comedy in the vein of Woody Allen’s Stardust Memories, but more deeply, a referendum on the dead-end choices Rock himself might be feeling.

There’s a loose-limbed ease here that’s as inclusive as it is in-jokey... broad and filthy enough for multiplex appeal, but also sufficiently arch to satisfy those who fancy themselves a little more sophisticated.

It’s a big leap forward for Rock as both an actor and a filmmaker...

Top Five is Rock's best movie by a mile. It's authentically hilarious.

Rock brings down the house in this uproarious celebrity self-portrait.