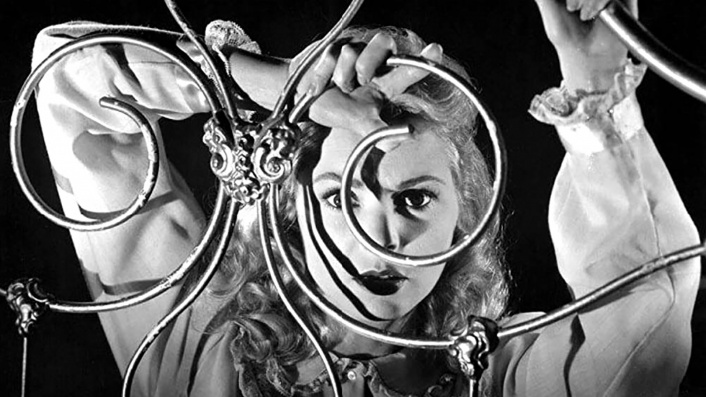 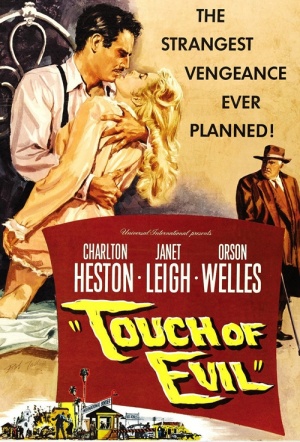 Mexican Narcotics officer Ramon Miguel 'Mike' Vargas (Charlton Heston) has to interrupt his honeymoon to Susie (Janet Leigh) when an American building contractor is killed. He dies on the US side of the border but it's clear that the car bomb that killed him was planted on the Mexican side. As a result, Vargas delays his return to Mexico City where he has been mounting a case against the Grandi family crime and narcotics syndicate.

Police Captain Hank Quinlan (Welles) is in charge on the US side and he soon has a suspect, a Mexican named Manolo Sanchez. But when Vargas catches Quinlan planting evidence to convict Sanchez, he finds his own life, and that of his wife's, in danger.

Touch of Evil smacks of brilliance but ultimately flounders in it. Taken scene by scene, there is much to be said for this filmization of Whit Masterson's novel, Badge of Evil. Orson Welles' script contains some hard-hitting dialog; his use of low key lighting is effective, and Russell Metty's photography is fluid and impressive; and Henry Mancini's music is poignant. But Touch of Evil proves it takes more than good scenes to make a good picture.

Touch of Evil may be the sleaziest good movie ever made.

Is there a resonance between the Welles character here and the man he became? The story of Welles' later career is of projects left uncompleted and films altered after he had left them. To some degree, his characters reflected his feelings about himself and his prospects, and ``Touch of Evil'' may be as much about Orson Welles as Hank Quinlan. Welles brought great style to his movies, embracing excess in his life and work as the price (and reward) of his freedom.

Welles however towers over the proceedings, on-screen and off. His Quinlan is a grotesque, hauntingly recognisable creation, embittered by the past and forever doomed to seek former glories. Masterful.

Touch of Evil is available to stream in New Zealand now on Google Play and Apple TV and AroVision.