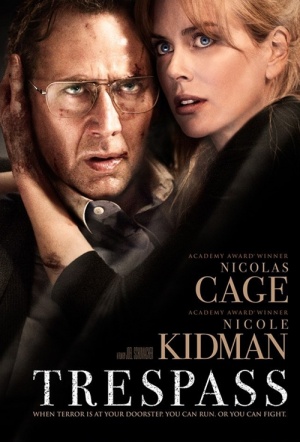 Nicholas Cage and Nicole Kidman star in this psychological thriller as a wealthy married couple taken hostage in their own home by violent extortionists. Joel Schumacher (Phonebooth) directs.

"In a private, wealthy community, priority is placed on security and no exception is made for the Miller family's estate. Behind their pristine walls and manicured gardens, Kyle (Cage), a fast-talking businessman, has entrusted the mansion's renovation to his stunning wife, Sarah (Kidman). But between making those decisions and keeping tabs on their defiant daughter (Liana Liberato, Trust), Sarah finds herself distracted by a young, handsome worker (Cam Gigandet, Easy A) at their home. It will take a group of cold-blooded criminals led by Elias (Ben Mendelsohn, Knowing), who have been planning a vicious home invasion for months, to bring the Miller family together. When they storm the manor, everyone is tangled up in betrayal, deception, temptation and scheming." (Official Synopsis)

Trailer
22%
want to see
See all