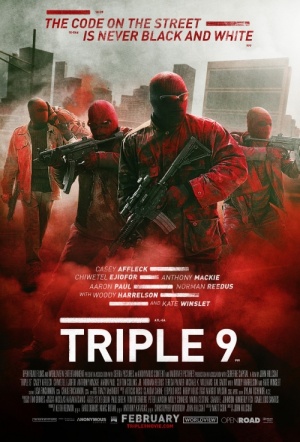 Brutal crime drama from the director of 2009's The Road that sees criminals and corrupt cops banding together for a massive heist. Stars Aaron Paul, Chiwetel Ejiofor, Norman Reedus and Kate Winslet.

A crew of dirty cops are blackmailed by the Russian mob to execute a virtually impossible heist and the only way to pull it off is to manufacture a 999 - police code for "officer down". Their plan goes to hell when the unsuspecting rookie they set up to die foils the attack, triggering a breakneck action-packed finale tangled with double-crosses, greed and revenge.

This is the anti-Heat: no sheen, no shimmer, no obsessing over highly grandiose themes and precise compositions; just grime and desperation.

Carried off with brashness and momentum by a director who genuinely seems to be having a blast.

The story is clotted and overloaded, lacking the necessary clean tautness and suspense.

Any description of Cook's intricate plot would make Triple 9 sound more coherent and comprehensible than it comes across while experiencing the film.

The interesting world of the film doesn’t get the story it deserves.