After Angry Birds, a movie based on an app, Transformers and Lego franchises built on toys, a full-length feature about multi-coloured, vertically haired, squat, 1950s Danish dolls, that were popular in the 1990s, seems inevitable. As merchandise cash-ins go, it could be worse. But then, with a plot, script and characters this thin, it could be a hell of a lot better.

Who, aside from grumpy critics like me, would want to harm those cute Trolls? Bergens! Beastly ogres convinced eating our relentlessly cheery protagonists is the only way to experience happiness. So, basically Trolls are their version of tequila shots.

Directed by the pair behind both Spongebob and Alvin and The Chipmunks sequels, with a score by Christophe Beck (of Frozen fame), Trolls exudes oodles of energy, buckets of psychedelic colour, a gorgeously realised world of animated felt textures, and a cast in which Anna Kendrick, (as Princess Poppy), and Justin Timberlake (as cynical survivalist Troll, Branch) shine, amongst the largely under-utilised, (and often unspottable), voices of Zooey Deschanel, Russell Brand, John Cleese, James Corden, Jeffrey Tambor and Gwen Stefani.

Bright yet bland, vivid and vacuous, with groan-worthy gags, and pop songs sprinkled liberally throughout, (including a fun use for Gorillaz ‘Clint Eastwood’), Trolls struggles to hold interest or entertainment value for those over eight. From characters pooping cupcakes and farting glitter, Trolls may be infantile and lacking in adult laughs but, judging by the ikkle giggles around me, it’s undeniably entertaining fare for young ‘uns.
0 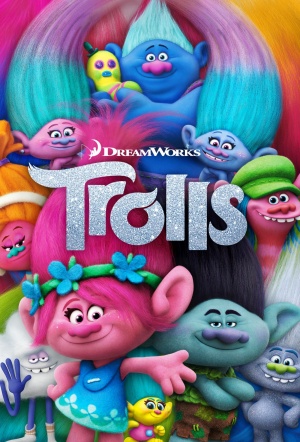