A slug is just a homeless snail

Turbo is what you’d expect and little else. Aside from turning the laws of both physics and biology on their heads Turbo attempts to teach kids valuable life lessons because as parents, we are all flatulent, bobble-headed failures. It’s a wonder children don’t frequently explode in the street from parental ineptitude. Fortunately, Dream Works and 20th Century Fox are here to educate and mould our children into well balanced adults that understand that a garden snail can not only talk but, if just the right amount of nonsense happens he’ll excrete neon blue slime at an alarming rate.

OK, all joking aside Turbo really is what you’d expect from a kids movie about a talking snail that wants nothing more to be more than he is.

As far as animated fare goes, this is up there. But without an original theme and with a fairly mundane story-line it helps to forget everything you have ever learned about the world before watching this one with your kids. And prepare yourself for the obligatory 20 questions from your ankle bitters.

My rating is based on the brain cells required to watch the movie: 2 (actually you only need one but it may pay to have another to make sure your body’s biological operations don’t stop). 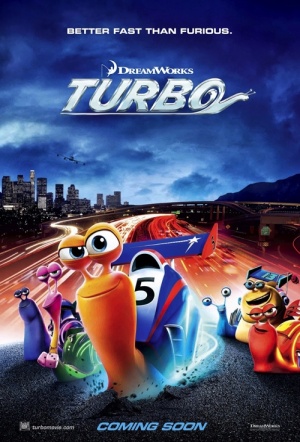