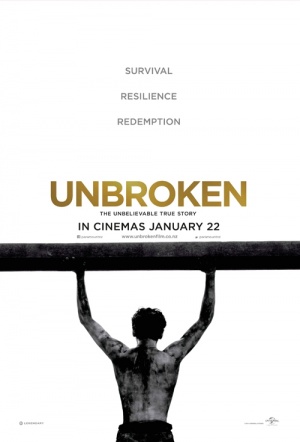 The true story of American Olympic runner Louis Zamperini (Jack O'Connell, Starred Up) who, having been sent to World War II, survived in a raft for 47 days after a near-fatal plane crash only to be caught by the Japanese Navy and consigned to a prisoner-of-war camp. Directed by Angelina Jolie (her second feature after 2011's Bosnian War drama In The Land of Blood And Honey), co-written by the Coen brothers.

Zamperini serves as a bombardier in the Pacific theatre, raining destruction on Japanese military targets. Like many US servicemen, he has an interesting past, having overcome childhood criminality to excel at distance running, representing his country at the 1936 Berlin Olympics. When his plane goes down in remote ocean, Zamperini's athletic discipline helps him survive for a remarkably long time. But that test of endurance only leads to another when captured by the Japanese, where his status as an Olympian will earn him prolonged abuse at the hands of a sadistic prison camp boss (Japanese musician Miyavi).

Louis Zamperini’s story is an awe-inspiring triumph-of-the-human-spirit tale if there ever was one. The former Italian-American athlete, who was once one of the fastest high school runners ever recorded and competed in the 1936 Berlin Olympics, survived 47 days adrift at sea in a raft, and was later captured and sent to a Japanese POW camp where he was repeatedly beaten by a sadistic prison guard.

The passionate commitment of all involved rarely achieving gut-level impact.

Jolie has assembled an A-list team, but while her film is perfectly competent, it hardly dazzles.

What the movie ends up in desperate need of is a sense of life made real and palpable through dreadful, transporting details, not a life embalmed in hagiographic awe.

Though high-minded and well-intentioned, there’s something faintly stodgy and safety-first about the endeavour.

Unbroken just piles on the misery without tonal shift, any sense of rise and fall, or any interest in Zamperini’s inner life...

It is a handsome film, bleak and dark and elegantly filmed told with a mixture of intensity and something like restraint, even distance.

A well acted and visualized, if not fully rendered, telling of a fine book and a great life.

Struggles to bring truth to an unbelievable truth.