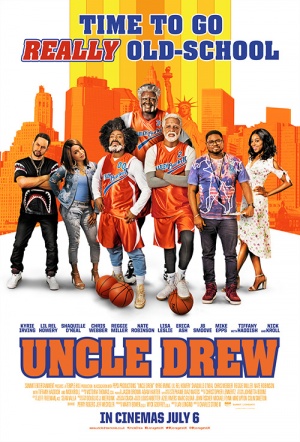 Sports comedy from the director of Drumline, starring NBA All-Star Kyrie Irving as the character from his Pepsi Max commercials. Co-stars Lil Rel Howery (Get Out) and Shaquille O'Neal.

After draining his life savings to enter a team in a Harlem street ball tournament, Dax (Lil Rel Howery) loses his team to his longtime rival (Nick Kroll). Down and out, Dax stumbles upon the legendary Uncle Drew (Irving) and convinces him to return to the court one more time. The guys round up Drew's old basketball squad (O'Neal, Chris Webber, Reggie Miller, Nate Robinson, and Lisa Leslie) and prove that a group of septuagenarians can still win big.

"Uncle Drew" may be tired, but it shows that one's fundamental love for the game never gets old.

It's crude, formulaic and the grey wigs and eyebrows, wrinkly make-up and prosthetics...are often hilariously unconvincing. Yet there's something resolutely likeable about the whole thing.

It's not every day that you can say, "Shaquille O'Neal was the best actor in that movie."

It coasts along on recognition and sports star-status and not enough has been done on the script.

Amusing, if not a slam-dunk.

Its heart is in the right place, but some lively performances from the better-than-you'd-expect ballers-turned-actors can only paper over a thin, cliché-riddled script so much.

Alas, the resulting film, made in association with Pepsi and directed by Charles Stone III, falls into a disappointingly formulaic lull for large stretches, squeezing all spontaneity from the proceedings.