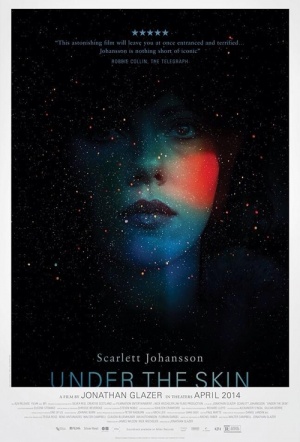 Scarlett Johansson (The Avengers) stars as a mysterious alien seductress, targeting lone men on remote highways, in this stark sci-fi thriller from director Jonathan Glazer (Birth, Sexy Beast). Based on Michel Faber's acclaimed 2000 novel, nominated for a Gold Lion at the 2013 Venice Film Festival, and most impressive of all, number one on the Flicks critics' poll of best films in the 2014 NZ International Film Festival.

"On Scotland's lonely back roads, a beautiful woman (Johansson) stalks unwitting men. Her identity and her motives unclear, she is simply, and quite literally, a sexual threat. Her eyes deadened but alert... More could be said about the plot, but it's best to allow Under the Skin to reveal itself. From its arresting first image - a pure, white pinpoint of light - it expands outward to become an increasingly absorbing mystery. It's also a Rorschach test for everything one might fear about relations between men and women....  Here, he offers shades of Kubrick and Hitchcock in his depiction of sexuality, capturing a cool, predatory impulse rather than simple heat." (Toronto International Film Festival)

Under The Skin / Reviews

An undeniably ambitious but ultimately torpid and silly tale of an alien on the prowl.

You may not be sure what you've seen, but you've sure seen something.

An intoxicating marvel, strange and sublime.

A striking attempt to tell an exotic story in a down-to-earth environment that deserves praise for its singularity of vision, even as it runs the risk of ridicule.

Viewers willing to embrace a purely visual experience without dramatic, emotional or psychological substance will comprise an ardent cheering section.

Odd and sexy, troubling and touching, frustrating and mesmerising, dull and haunting.

Under The Skin / Trailers