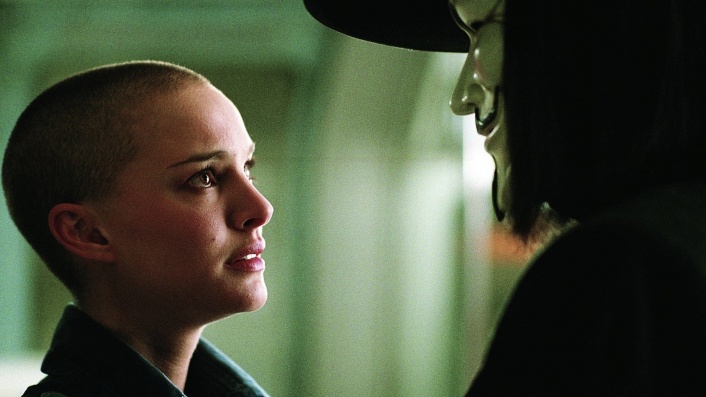 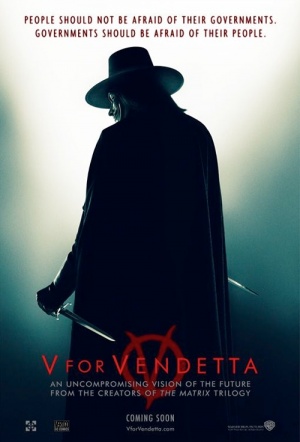 Graphic novel adaptation, written by the Wachowskis (The Matrix) starring a bald Natalie Portman and masked Hugo Weaving. Set in the future, in a cruel and corrupt, totalitarian Britain, where its citizens are whipped by a bullying nanny state. The nation gets an uppercut when a masked vigilante known as 'V' (Weaving), in a Guy Fawkes-like act, blows up the Old Bailey. Charismatic and skilled in combat and deception, V incites a revolution - urging the people to rise up against their oppressors.

Flawed, for sure, but the best Moore adap so far. The Wachowskis again craft a sinister, spine-tingling and relevant vision of the future.

Mad as hell and out to rile up a politically lethargic youth audience, V for Vendetta sometimes trips on its ambitions. But who gives a damn? At least this grabber of a movie actually has ambitions.

A compelling, rousing and at times strangely moving entertainment.

Now a big-budget movie has come along to perform a wholesale act of image rehabilitation, transforming Fawkes from terrorist into one of those folk heroes whose retribution-dispensing agenda dovetails nicely with the greater od of an entire nation. He's like Robin Hood, the Scarlet Pimpernel and Jean Valjean all rolled into one...

This is the best Moore-to-big-screen translation yet...