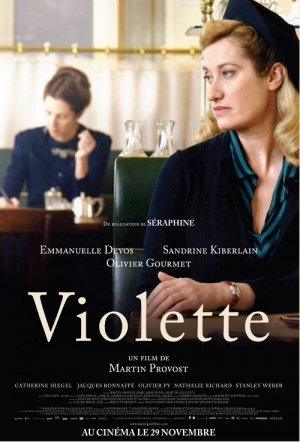 "Simone de Beauvoir. Her name summons up an entire universe. Feminism. Sexual freedom. Post-World War II France in the grip of intellectual fervour. The Second Sex. And it also summons up the names of those who passed through her life: Sartre, Camus, Merleau-Ponty. This heady world is the setting for a remarkable film about one of de Beauvoir's friends, acolytes, admirers, and fellow travellers, the relatively unknown Violette Leduc. Leduc was in many ways as much of a pioneer as de Beauvoir, but while fame, success, and fortune fell relatively easily to the latter, Leduc found herself on another path, struggling throughout much of her life with poverty, indifference to her work, and psychological issues." (Toronto International Film Festival)

Fully worthy of her complex life and work.

It's about coming to peace with solitude, leagues beyond most biopics.

Violette's hold on life can be terrifying, at times ugly, but what she finally makes of that life is beautiful.

So compelling, even thrilling, in its frank depictions of female sexual voracity...

Though it has a rough start, this is a beautifully crafted and performed period drama.