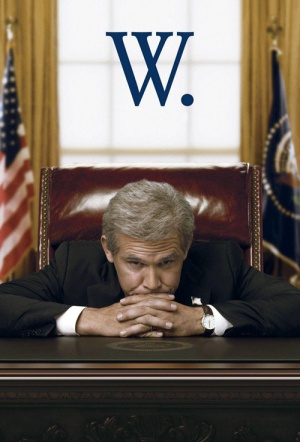 Oliver Stone's biopic on the life and presidency of George Bush Jr. stars Josh Brolin (No Country For Old Men) as the titular Dubya. This even handed account of what drives the man takes off during his college years when he was fond of the bottle and the shame of the family, through his miraculous rise to President and eventual invasion of Iraq.

It was inevitable that George W Bush, one of the most controversial and humorous political figures of the decade, would get his own biopic. That Oliver Stone, cinema’s great conspiracy theorist, would be the one to make it was similarly likely. The only shock is that it came out so immediately.

For a film that could have been either a scorching satire or an outright tragedy, W. is, if anything, overly conventional, especially stylistically.

Perhaps it’s just all too soon for this. With key personnel and events fresh in our minds, still appearing on the daily show that is the world news, W. occasionally plays like a bad Saturday Night Live sketch. Stone himself has said he felt that if he didn’t make the movie right now, it probably wouldn’t be made for a long time. Maybe, for all the entertainment value, that wouldn’t have been such a bad idea.

The movie is an X-ray of an invisible man -- by the film's end, the W. still stands for Who?

The pleasure of Mr. Stone's work has never been located in restraint but in excess, a commitment to extremes that can drown out the world or, as in this film, give it newly vivid, hilarious and horrible form.

W., a biography of President Bush, is fascinating. No other word for it.

Unintentionally hilarious dramatisation of the Bush White House is political history as burlesque.

It is neither damning nor apologetic, and is somehow quite boring...

W. is not a dispassionate biography; it is an interpretation of personality intersecting with history, and as a piece of drama it is persuasive and perfectly creditable.

It's a gutsy movie but not necessarily a good one. Its greatest strength is that it wants to talk about what's on our minds right now and not wait for historians.

Disappointing. Stone whipped this out in time for the US Presidential election, but it’s hard to see how it’ll make any significant impact on voters. Or why it even should.