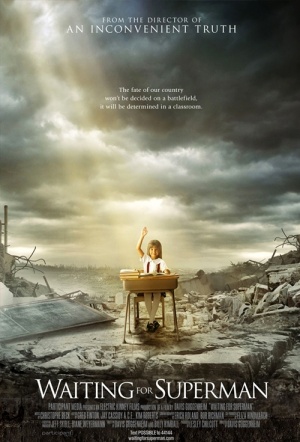 Documentary from the director of An Inconvenient Truth that analyses the failures of America's public education by following several students through the educational system.

"For a nation that proudly declared it would leave no child behind, America continues to do so at alarming rates. Despite increased spending and politicians’ promises, our buckling public-education system, once the best in the world, routinely forsakes the education of millions of children. Filmmaker Davis Guggenheim reminds us that education “statistics” have names: Anthony, Francisco, Bianca, Daisy, and Emily, whose stories make up Waiting for 'Superman'.

"As he follows a handful of promising kids through a system that inhibits, rather than encourages, academic growth, Guggenheim undertakes an exhaustive review of public education, surveying “drop-out factories” and “academic sinkholes,” methodically dissecting the system and its seemingly intractable problems." (Sundance Film Festival 2010)

Director:
Davis Guggenheim ('It Might Get Loud', 'An Inconvenient Truth')