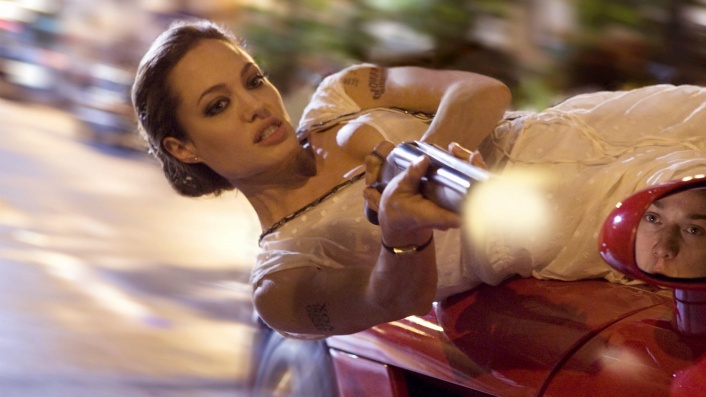 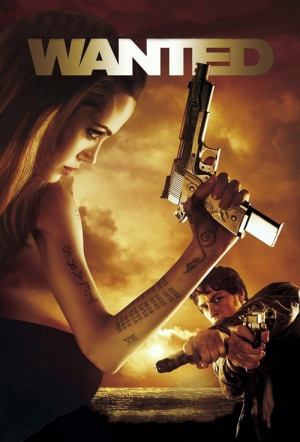 Wesley Gibson (James McAvoy) is a good-for-nothing slacker with a nasty boss and a bored girlfriend. A waster of space. After the death of his dad, he meets a woman named Fox (Angelina Jolie) who recruits him into the 'Fraternity', a secret society that trains Wes to avenge his dad's death by unlocking his "dormant powers". Before he knows it, he's 'curving' bullets. He discovers this team lives by an ancient, unbreakable code: carry out the death orders given by fate itself. With tutoring from the fraternity's enigmatic leader, Sloan (Morgan Freeman), Wes grows to enjoy all the strength he ever wanted. But slowly, he begins to realize there is more to his dangerous associates than meets the eye.

Like it or not, Wanted pretty much slams you to the back of your chair from the outset and scarcely lets up for the duration.

Things happen in Wanted, but no one cares. You could call that nihilism, but even nihilism requires commitment of a kind and this, by contrast, is a movie built on indifference.

Despite all the thrills and spills, Wanted will leave you wanting just a little bit more.

Fast-moving and bloody, enjoyable even within its unapologetically generic limits. But McAvoy is its real secret weapon: With his X-ray blue eyes and lips that look bitten with anxiety, he has the miraculous ability to fool us into thinking there's really something at stake here.

Excess-adrenalin causes assassin fantasy action flick to get a little off target.

Not as dark as its source material, Wanted works exceptionally on its own terms. McAvoy crashes the A-list, Jolie finally gets to be as big a star on screen as she has been in print, and Bekmambetov proves the most exciting action-oriented emigré since John Woo.

Wanted is completely preposterous; the kind of over-the-top action flick that requires you to leave your brain at the door. And yet, it's also fun.