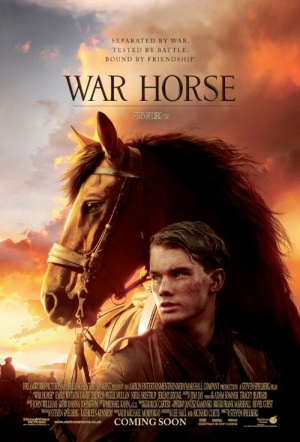 Spielberg directed war-drama, based on both the children's novel and its stage adaptation, about a British lad who sets out on a journey to rescue his horse from the battlefields of World War I.

Albert's (newcomer Jeremy Irvine) pet horse and best friend, Joey, is sold to the calvary at the outbreak of the first World War. Heartbroken, Albert heads to France to find his friend, despite being too young to enlist in the British army. The film follows Joey's journey across Europe and through the war, as well as Albert's search.

War Horse shows Spielberg back in the saddle, in full command of story, setting and characters.

In the end, while you can't doubt Spielberg's commitment to telling a putatively heartwarming and emotion-wringing tale, War Horse is just too calculated to do what he wants to do.

War Horse is bold, not afraid of sentiment and lets out all the stops in magnificently staged action sequences.

War Horse left me strangely and definitively unmoved on every level, with a cheesiness factor alienating me from the characters and robbing me of any connection with the story.

A grandly made, tear-jerking film for all audiences, the way Hollywood used to make them.

This is a beautifully built, classically framed movie, shot with the unshowy natural expressiveness of a John Ford Western.