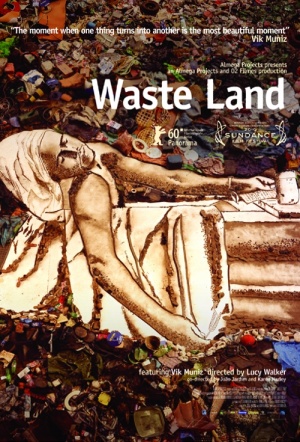 "Vik Muniz is a Brazilian artist known internationally for composing portraits from such materials as sugar and chocolate syrup and, now, in this totally engaging, unpredictable film, trash. The Brooklyn-based photographer grew up poor and we meet him as he heads home to undertake a series based at Rio de Janeiro’s Jardim Gramacho, one of the world’s largest garbage dumps. His subjects are the catadores who pick through the trash to gather, sort and sell recyclables. The men and women we meet are an inspiring bunch of individuals: cheerful, thoughtful, energetic, and as deserving as any historical figure of the celebration (not to say outright lionisation) that a gigantic Muniz portrait confers on them. Muniz, whose art commands high sale prices, sells work in the series to benefit their Garbage Pickers Association." (NZ International Film Festival 2010)