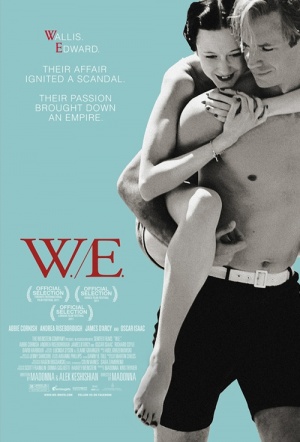 Romance directed by Madonna, starring Abbie Cornish. The drama switches between two parallel stories: the lovesick life of a women in modern-day Manhattan and the "greatest romance of the century", that of Wallis Simpson and King Edward VIII in 1930s England.

"In 1998, lonely New Yorker Wally Winthrop (Cornish) is obsessed with what she perceives as the ultimate love story: King Edward's VIII's abdication of the British throne for the woman he loved, American divorcée Wallis Simpson. But Wally's research, including several visits to the Sotheby's auction of the Windsor Estate, reveals that the couple's life together was not as perfect as she thought. Weaving back and forth in time, W.E. intertwines Wally's journey of discovery in New York with the story of Wallis (Andrea Riseborough) and Edward (James D'Arcy), from the glamorous early days of their romance to the slow unraveling of their lives in the decades that followed." (Official Synopsis)