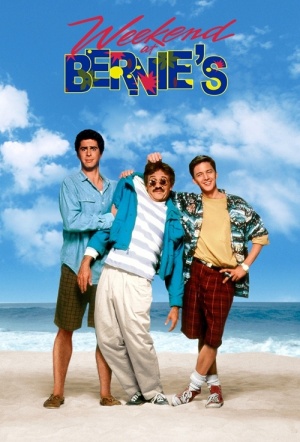 An oddball comedy from 1989 following two wannabe employees who discover the body of their dead boss Bernie, prompting them to play him off as still being alive. But the hit man responsible for Bernie’s death is out to finish the job...

Larry (Andrew McCarthy) and Richard (Jonathan Silverman), two employees for a big corporation, approach their boss Bernie with a major financial error. Faking his excitement, Bernie invites the boys over to his beach house for the weekend where he secretly plans to murder them both. However, death finds Bernie first at the hands of his mafia partner.

When Larry and Richard discover Bernie’s lifeless body, party guests begin to arrive at the beach house. In order to avoid anyone noticing his death, the boys wrap a pair of shades on him and ‘puppeteer’ Bernie’s corpse back to life.