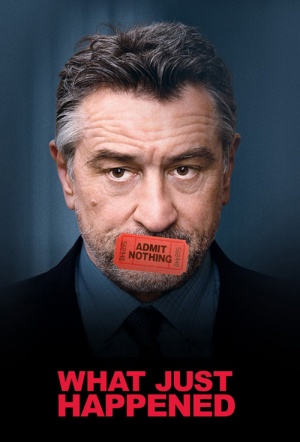 Barry Levinson built his career on a reputation of being bitingly satirical, enjoying success with Good Morning, Vietnam, Rain Man and Wag the Dog. A few minor misfires like Sphere and Robin Williams vehicle Man of the Year, haven't really sullied his name, with a major cast signing up for his latest cynical venture.

Set against the Hollywood backdrop of child support, ex-wives, therapy, and affairs of the heart, mind and bedroom, What Just Happened? is based on the memoir of successful movie bigwig Art Linson and stars Robert De Niro in the central role of a fading movie producer. The inner bowels of the movie business is on show: its tantrums, over-indulgences, cynicism and general distrust and fear of the next crisis. Also stars Catherine Keener, Bruce Willis, Sean Penn, Robyn Wright Penn.

This is scarcely the first time prominent industry insiders have turned their lenses on their own kind to hold them up to public scrutiny, even ridicule, and in the annals of pictures about the film capital, writer-producer Art Linson and director Barry Levinson's rates somewhere in the midrange, both in quality and viciousness.

Makes Hollywood looks like a very expensive, lethal version of high school, but lots of fun from a safe distance.

Think of it as old Hollywood's version of "Entourage," an insider's take on the greed and vanity that make Tinseltown tick.

Not an insightful look into movie-making but well-acted, easy entertainment.

The movie is brilliant at portraying the incredibly high stakes of the seemingly inconsequential and the tremendous amounts of money spent on it.

The question is: What has Levinson and Linson brought to this re-make that is exciting, new and different? Not much.

A playful industry satire made by victors. That's actually pretty cold when you think about it.