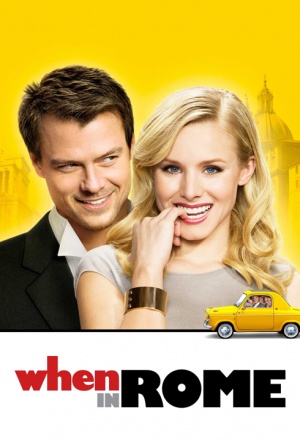 Ambitious young New Yorker, Beth (Kristen Bell), is in Rome for her sister's wedding. Disillusioned with love, she makes a wish in a "fountain of love" and magically ignites the passion of an odd group of suitors: a sausage magnate (Danny DeVito), a street magician (Napoleon Dynamite's Jon Heder), an adoring painter (Arrested Development's Will Arnett) and a self-admiring model (Dax Shepard). But when a charming reporter (Transformers' Josh Duhamel) pursues her with equal zest, how will she know if his love is the real thing?

When in Rome / Reviews

There are dull stabs at verbal wit that leave you baffled, bored or slightly grossed out.

The latest demonstration of the impossibility of making a good movie from a bad script is provided by When in Rome, a romantic comedy approved by the previous regime at Disney.