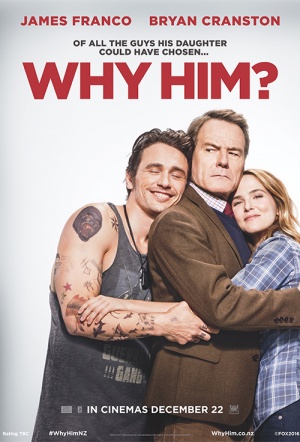 A loving father (Bryan Cranston) cannot allow a happy-go-douchie millenial millionare (James Franco) to marry his daughter in this comedy. From the director of I Love You, Man.

Over the holidays, Ned (Cranston) and his family visit his daughter (Zoey Deutch) at Stanford, where he meets his biggest nightmare: her well-meaning but socially awkward Silicon Valley billionaire boyfriend, Laird (Franco). The straight-laced Ned thinks Laird, who has absolutely no filter, is a wildly inappropriate match for his daughter. The one-sided rivalry and Ned’s panic level escalate when he finds himself increasingly out of step in the glamorous high-tech hub, and learns that Laird is about to pop the question.

The question in this movie's title gets a lot of use. A version of it could also apply to pretty much everyone involved, especially Cranston.

It's bluntly cheeky, it goes on for too long, but the concept keeps on giving.

The title isn't the only "why" question viewers should be asking themselves.

Proving definitively that slapping Mr. Franco's scenery-eating grin on any old drivel doesn't guarantee entertainment, "Why Him?" is trite, crass and insultingly moronic.

A disposable bit of Yuletide fun.

There is a passable 85-minute comedy in here, caked in an additional 30 minutes of flab. Call it a dad-bod comedy.

Almost nothing anyone does registers as recognisably human; it's all just a pretext for yet another round of envelope-pushing outrageousness.

Why Him? is the best Judd Apatow movie that Judd Apatow had nothing to do with: it's sweet, raunchy, big-hearted, and very, very funny.