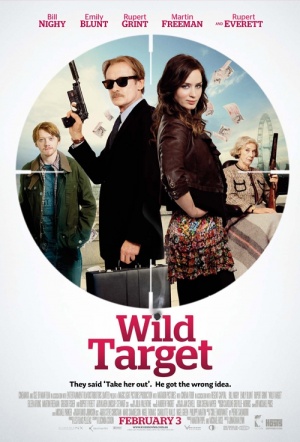 Action-crime-comedy about a middle-aged assassin who trying to give up the game.

Victor (Bill Nighy) is a most respected assassin and also the most expensive, carrying on the family business extablished by his grandfather. Problem is, it's not a job where you tend to meet the right girl. So his domineering mother grows increasingly worried that an heir to the family business won't eventuate.

By contrast, Rose (Emily Blunt) is a free spirit, a gleeful, joyous thief. When Victor finds her as his target, but then becomes drawn to her, he spares her life, only to unexpectedly aquire in the process a young apprentice, Tony (Rupert Grint).

Adapted from an old French farce but played in a way that is quintessentially British, Wild Target probably shouldn’t work given the two differing comedy styles it blends together. While this fusion isn’t entirely pitch perfect, for the most part it succeeds in being a funny and entertaining black comedy.

The considerable wit, style, and skill that Mr. Nighy and Ms. Blunt bring to the project are squandered.

The considerable wit, style, and skill that Mr. Nighy and Ms. Blunt bring to the project are squandered.

Jonathan Lynn's lamentable black comedy Wild Target again shows that attractive and charismatic actors can do nothing to save a movie that's charmless, pointless and witless.

A talented cast keep some low-key action and tired gags from derailing this disappointing farce.