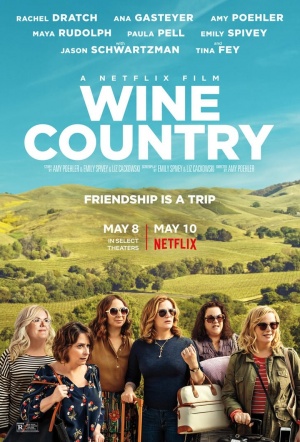 Amy Poehler directs and leads this Netflix comedy about a group of longtime pals celebrating a 50th birthday at many, many wineries. However, the two-decade-strong friendship carries tensions from the past that resurface during the boozy getaway.

Amy Poehler directs and leads comedy Wine Country, now streaming on Netflix, about a group of longtime pals celebrating a 50th birthday at many, many wineries.

On paper, Wine Country is a comedy dream – especially for fans of fantastic funny ladies. Amy Poehler not only makes her film directorial debut, but jumps in front of the camera too, featuring alongside fellow Saturday Night Live alumni Maya Rudolph, Tina Fey, Ana Gasteyer and Rachel Dratch. The latter – who was meant to star in 30 Rock, only to be replaced after the pilot – is afforded a rare sizeable role, while ex-SNL writers Paula Pell and Emily Spivey round out the cast. Plus, as well as being buoyed by beloved players from Parks and Recreation, Bridesmaids and Sisters, the whole caper is inspired by the real-life friends’ own off-screen getaway to the Napa Valley.

"Wine Country" offers Netflix subscribers an excuse to stay in, uncork, and toast a comedian who's taking the next step in her career.

Despite having only one character trait apiece, the cast each slip into their semi-fictionalised roles as comfortably as a trusty longline cardigan. If only there were a bit of edge on show.

The scripted lines rarely zing, sing or sting (some seem improvised), but when the performers fall down or screw up their faces, you get to watch them fill in their characters with something like real feeling...

Wine Country is scrappy and, at times, misjudged but it's also very, very funny with a cast of women whose collective charm makes the patchier moments forgivable.

Star Amy Poehler's directing debut about six female friends on a weekend break in Napa trips up on its journey from silly to soul-searching. No matter. Poehler seems to think that the pleasure of their company is enough. She's right.

"Wine Country" is quaffable enough. If pressed to supply my own tasting notes, I might describe the blend as unwieldy but not unpleasant, sometimes acid to the point of bitterness (the tartest lines go to Amy Poehler, who also directed).

There are hints of a complex varietal in the Napa-set lark, but mainly it's a fizzy blend of dependable ingredients: seasoned comedy talents and an episodic story that, despite glimmers of anarchy, sticks to a reassuring comfort zone.