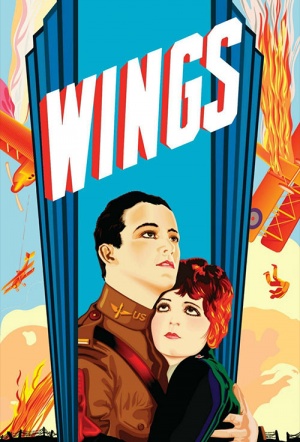 Clara Bow (It) and Charles 'Buddy' Rogers (My Best Girl) star in this silent war classic which received the inaugural Academy Award for Best Picture.

Two young men - one rich, one middle class, and both in love with the same woman (Jobyna Ralston) - become US Air Corps fighter pilots and, eventually, heroic flying aces during World War I. Devoted best friends, their mutual love of the girl eventually threatens their bond. Meanwhile, a hometown girl (Bow) who's the love-struck lifelong next-door neighbour of one of them, pines away.

There not being so much of Clara Bow in the picture, she gives an all around corking performance.

Long touted as a classic by cinema historians, and justifying almost every adjectival extravagance.

This feature gives one an unforgettable idea of the existence of these daring fighters.

A good hand, played well. Given the likelihood of The Artist's forthcoming Oscar ascendancy, Paramount knew what they had, what to do with it, and when to do it.

Clara Bow is mesmerising in this ahead-of-its-time air force drama.

Wings is an amazing production, and it is easy to see why the film won the inaugural Best Picture (the only silent film to win the award).