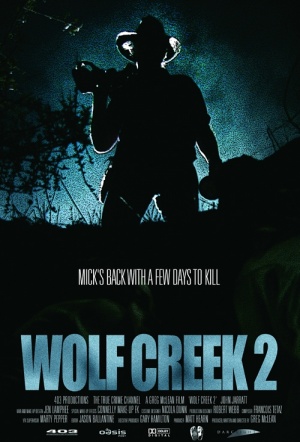 John Jarratt (Django Unchained) is back as psychotic serial killer Mick Taylor, the "Norman Bates of the billabong", in writer-director Greg Mclean's bloody sequel to the 2005 horror.

It's business as usual for Mick as three unwitting tourists - two Germans and Brit - find themselves wandering into his 'backyard'. Some elderly folks and local police also fall foul of his murderous ways. Says Variety:  "It turns out [Taylor] doesn't merely prey on young tourists because they’re the most plentiful... he's driven by a fervently right-wing loathing for all foreign intruders, carrying a bloody chip on his shoulder from the days of Australia being used as a salubrious depot for exiled British convicts."

Since cult hit Wolf Creek, Mclean has been embraced by the horror community and won admirers such as Quentin Tarantino (enough to score Jarratt a cameo in Django Unchained). Mclean co-writes the script here with Australian horror writer Aaron Sterns.

Neither as striking nor as scary as its predecessor, McLean's robustly crafted sequel is still quite a ride.

I could not wait to have a shower to wash off the grime.

Holds up a mirror to society, and the reflection is disturbing... Throw another tourist on the barbie, Mick.

A psychopathic serial killer and his knife carve out an edge-of-seat gorefest that follows safely in the tracks of its predecessor... endorsed by Tarantino.

Watching [Jarratt] reel off his repertoire of guttural grunts and wince-worthy wisecracks is like being trapped on a crowded train next to a drunk and disturbed circus clown.

More spine-snapping fun with Mick Taylor, the Norman Bates of the billabong... a lot of exhilarating chases that could come straight from the 70s golden age of Ozploitation, when Brian Trenchard-Smith was king.