Themes too dark for youth + Humour too childish for adults = No target audience?

I honestly have no idea why this movie is called Wonder Park. It's never referred to as Wonder Park in the movie, it's always called Wonderland. I guess that is the kind of detail that is considered insignificant when your movie is embroiled in so much scandal. But let's focus on the movie itself.

Wonder Park is a film of many flaws, but what it does really well is its animation. Smooth, vivid and vibrant, there are some really great sequences. Combined with some great cinematography, those opening scenes of the film are a rich extravagance that builds an amazing sense of wonder. A very creative premise that plays out well, and it draws you into this world of fully customizable rides.

Outside of the animation though, things start to fall apart. What the trailer downplays, is how dark the film gets, thematically. Taking a page out of Disney Pixar's Up, the film throws an emotional spanner in the works with an arc involving the mother of the protagonist, June, and the remainder of the film turns into another adaptation of Jumanji which goes against the trailers. With minimal time spent in a functioning happy park and a story arc around the mother that will leave the younger children asking many questions, you can't help but feel that the writers were unable to get the tone right. There is definitely a reason why this film is rated PG; guidance will definitely be needed.

While the animation is fun and imaginative, the second half of the film has very little in the way of plot. Once in Wonderland, June has one thing to do, and with no real side stories or character development from any of the supporting cast, there is just nothing to keep your interest. Perhaps they ran out of space considering how much time was spent setting up the characters in the first act, but the pacing just felt off.

As with most animated films these days, many will include some of those subtle adult jokes that give the parent something to laugh about but goes over the kids' heads. None of that here. Everything is pretty on-the-nose, though there is the odd "son of a -" pieces of dialogue that may lead to a few repeated phrases from the little ones. The voice acting is great, but the dialogue so lazy that you know the entire personality of each one-dimensional character after one or two lines from each one. The jokes will fall flat if you are above the age of 10.

Overall, you have to wonder what the film's target audience is. below the age of 7, a parent may have some tricky plot points to explain. The plot and humour aren't mature enough to have too much appeal to anyone over 10 years old. 7-10 years of age will probably be the ideal age-range to bring to this flick. The animation is gorgeous, and the film does a great job setting up the characters in the first act, but the tone of the film just isn't right; there needs to be a better balance. 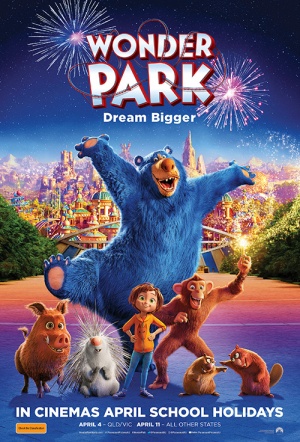