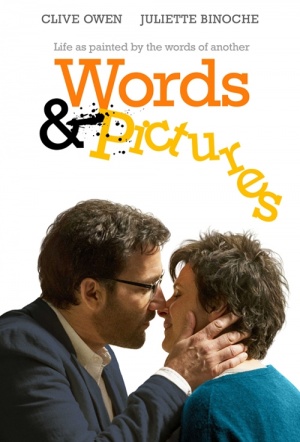 Clive Owen (Children of Men) and Juliette Binoche (Chocolat) star in this light romantic comedy about an English teacher who challenges the school's art teacher to a "war" between words and pictures and, in the process, sparks an unlikely romance.

"Prep school English teacher Jack (Owen) laments his students' obsession with social media and good grades - as opposed to rigorous engagement with language. A one-time literary star, Jack has not published in years. He's estranged from his son. In short, Jack has much to despair of, and when Jack despairs, Jack drinks...

"Dina (Binoche) is an abstract painter. Like Jack, she was once celebrated for her art, but the onset of arthritis has made the physical act of painting too painful to bear. Jack finds Dina attractive but icy; he flirts with and provokes her with equal relish. With a performance review looming and his job on the line, Jack comes upon an inspired method of galvanising student interest in their studies: he declares a war between words and pictures, confident that the former can convey greater meaning than the latter. Dina accepts Jack's challenge and the battles begin. But, before they even know it, their hearts have also entered the fray." (Toronto International Film Festival)

Has a host of flaws, but the performances by Mr. Owen and Ms. Binoche have a crackling vitality...

Does nothing inventive visually, and the stars can’t find the humanity beneath Di Pego’s dialogue...

An ill-fitting, occasionally awkward yarn that crackles at times (thanks to its charming leads), but struggles to fire.

That the couple have any charm is thanks to Owen and Binoche. In fact, it is hard not to hope that they'll get another chance at romance some day - the actors, that is.

If it wasn’t for the charming top-liners... the war in Fred Schepisi’s Words and Pictures would have to be called off after the opening skirmish.