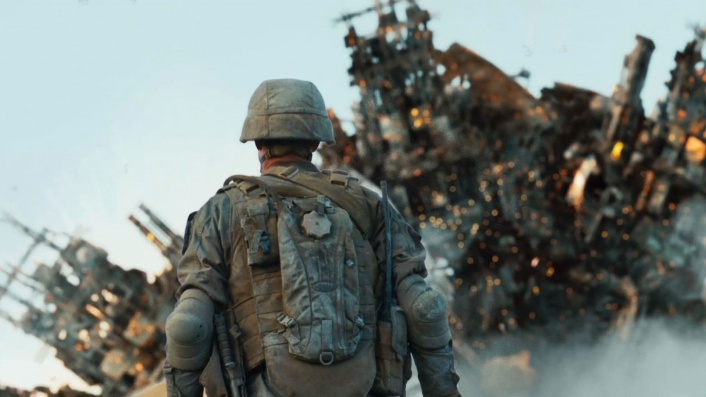 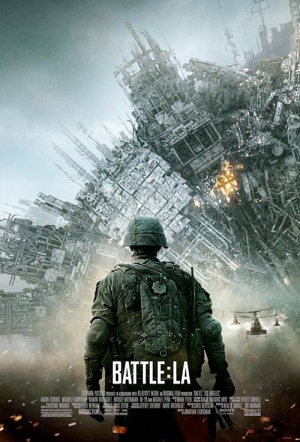 A Marine platoon faces off against an alien invasion in Los Angeles. Stars Aaron Eckhart and Michelle Rodriguez.

This sci-fi actioner takes its cue from real, reported events - referred to as 'Battle of Los Angeles'. On February 25th, 1942, just after 2am, hundreds of thousands of people witnessed something in the skies above Los Angeles. Army planes were scrambled to intercept, while anti-aircraft guns fired over 1,400 rounds for more than two hours. Nothing was hit or recovered (asides from friendly fire killing three civilians), the object disappeared. This event happened less than three months after the US entered World War II because of the attack on Pearl Harbour. Read more at Wikipedia.

Mostly, this is the cinematic equivalent of a first-person shooter game, one where the Marines possess only slightly more personality than the faceless invaders.

Imagine Black Hawk Down with ETs instead of Somalis and you'll have the measure of an explosive if functional actioner that will do while we're waiting for summer's big guns to arrive.

As it lurches from Act II to Act III, Battle: Loss Angeles reveals itself to be a lousy movie.

Here's a science-fiction film that's an insult to the words "science" and "fiction," and the hyphen in between them. You want to cut it up to clean under your fingernails.

The deadening and sometimes laughable litany of shouted military-style dialogue eventually pummels into submission any hope for fresh creative angles on this well-worn format.

Pretty much cardboard, down to the heroic patriotic speeches, and less distinctive even than last year's scarcely stellar "Skyline," which trashed the same city. Things blow up good and Eckhart is a classier actor than his role warrants, but we've all been here before.

What? Really? Someone's made another tired and lousy War of The Worlds ripoff already? But I'm still picking bits of popcorn out of my beard from Skyline.