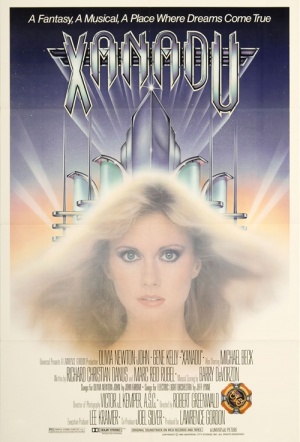 Campy '80s disco romp blending Greek mythology and a roller-disco, starring Olivia Newton-John (Grease) and song-and-dance screen legend Gene Kelly (Singing in the Rain). Credited as the film to inspire the Golden Rasberry Awards (Razzies), an annual award for the worst movies of the year.

In this musical fantasy, Kira ( Newton-John) is one of nine Greek muses who have returned to earth to inspire mortal men. She meets Sonny (Michael Beck of cult gang favourite The Warriors), an artist who spends his days at the mundane task of painting large album covers for the window of a local record store. He recognises her from an album cover he has painted, but she roller skates away before he can find out more. When they meet again, Kira convinces him to partner with ex-big band leader Danny (Kelly) who lost his muse - and creative inspiration - in the 1940s. The two men open happening roller-disco nightclub Xanadu, and find themselves happy and inspired once more.

When Kira breaks her sacred vows as a Muse and falls in love with Sonny, she is recalled by her parents to Olympus. Kira and Sonny are allowed one last night together at Xanadu; they must find a way to make it last forever.

Desperately stylish without having any real style.

Mushy and limp musical fantasy, so insubstantial it keeps evaporating before our eyes.

Desperately stylish without having any real style.

Mushy and limp musical fantasy, so insubstantial it keeps evaporating before our eyes.