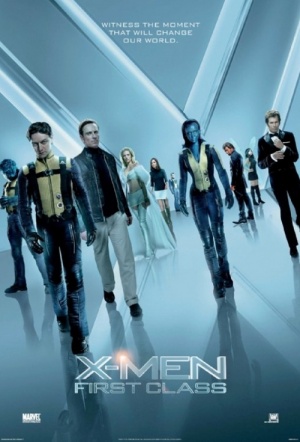 Prequel to the X-Men trilogy (2000-2006), set in the 1960s amid Cold War paranoia, following the origins of the Marvel mutant mythology. Directed by Kick-Ass' Matthew Vaughn.

Best buds Charles Xavier (James McAvoy) and Erik Lensherr (Inglourious Basterd's Michael Fassbender) discover their mutant powers for the first time. Taking the names Professor X and Magneto respectively, the pair team up with other mutants (some familiar, some new) to battle against the world's greatest threat. In the process, an irreparable rift between the friends opens, which begins the eternal war between Magneto's Brotherhood and Professor X's X-Men.

After undergoing some unfortunate mutations in recent years, a beleaguered Marvel movie property gets the smart, stylish prequel it deserves in X-Men: First Class.

There are some truly impressive things within this latest mutant outing.

A classy addition to the X-series that expertly establishes a hoard of characters, navigates a Cold War plot and squeezes a tear for a friendship failed. Dream-team casting and quality FX make this the summer blockbuster to beat.

All you'd expect from an X-Men film (or spin-off, or prequel), but not all you'd hope for. It smacks of rush and compromise, but there's thankfully enough to make you feel optimistic about the series' future once more.

Any film that co-opts the Nazi purges, the Cuban missile crisis and the civil rights movement better have the smarts to do so intelligently.