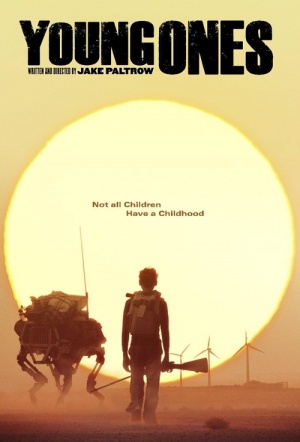 Lo-fi sci-fi Western set on a barren dustbowl planet in a dystopian future, where a family's precious land is under threat from the outside and from within. Stars Michael Shannon (Man of Steel), Kodi Smit-McPhee (Let Me In), Elle Fanning (Maleficent) and Nicholas Hoult (Warm Bodies).

"Water is running out. Land has withered into something wretched. The dust has settled on a lonely planet. Not long from now, the hardened survivors of the loss of Earth’s precious resources scrape and struggle. Ernest Holm (Shannon) lives on this harsh frontier with his children, Jerome (Smit-McPhee) and Mary (Fanning). He defends his farm from bandits, works the supply routes, and hopes to rejuvenate the soil. But Mary's boyfriend, Flem (Hoult) has grander designs. He wants Ernest's land for himself, and he means to get it." (Sundance Film Festival)

Gets so bogged down in its primal tale of murder and revenge that the most intriguing elements become little more than futuristic window dressing.

So bleak that its pitiless tone becomes downright mesmerizing.

There’s little refreshment on offer in this parched lo-fi sci-fi drama, despite the distinctive element of its retro rural setting.