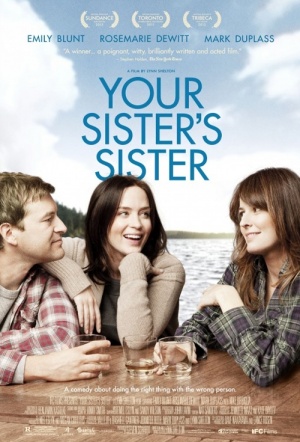 Comedy-drama examining the criss-crossing relationships between a man (grieving over the loss of his brother), his best friend and best friend's sister. Stars Emily Blunt (The Five-Year Engagement), Mark Duplass (Humpday) and Rosemarie DeWitt (The Company Men).

A year after his brother Tom's death, Jack (Duplass) is still struggling emotionally. When he makes a scene at a memorial party, Tom's best friend Iris (Blunt) offers up her family cabin on an island in the Pacific Northwest so Jack can seek catharsis in solitude.

Once there, however, he runs into Iris' sister Hannah (Dewitt) who is reeling from the abrupt end of a seven-year relationship and finds solace in Tom's unexpected presence. A blurry evening of drinking concludes with an awkward sexual incident, made worse by Iris' sudden presence at the cabin the next morning.

It's probably the best three-star movie this month. An effortless, emotional, funny little indie that few people will see. Be one of them.

Nothing about the movie is showy, except for Shelton's palpable love of good people making a mess of things. Barring some late-inning coyness, it's some of the truest, dinged-heart couples' circling of the year.

There is a looseness to the dialogue that suits the mood of the story-each character gets his or her own bombshell (or two) to digest and has to figure out how to cope with it.

The film's late swerves into melodrama and the neighboring region of farce feel panicky and pandering. The subtlety of the performances - Ms. DeWitt's in particular - is sacrificed for easy laughs, shallow tears and a coy trick ending. Just when it was starting to get interesting.

A captivating examination of criss-crossing relationships permeated by incisive performances.

This may be slight and familiar, but it also delivers a sweet-natured, poignant look at the differences between the sexes.