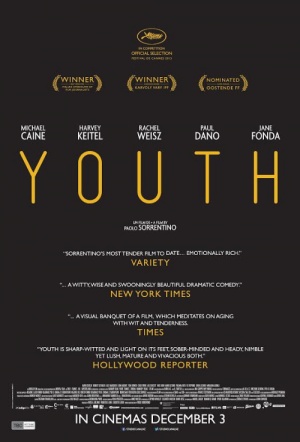 Acting royalty Michael Caine, Harvey Keitel and Jane Fonda star alongside Paul Dano and Rachel Weisz in this drama, nominated for the Palme d'Or at Cannes 2015. Directed by Paolo Sorrentino (The Great Beauty).

Caine and Keitel are friends and artists - a conductor and filmmaker respectively - holidaying in the Swiss Alps. The pair deal with old age, the winding down of their careers, their children, and an approach from Buckingham Palace.

What do mordant Cockney overlord Michael Caine, disgraced Argentian footballer Diego Maradona and kooky British singer Paloma Faith have in common? They're all in Paolo Sorrentino’s latest ode to art and ageing – and, frankly, they could all do a bit better. Sorrentino crafts lush, Fellini-esque tales of Italian high society (see The Great Beauty), but something’s lost in translation in this English-language effort.

Michael Caine and Harvey Keitel bring lifetimes of depth to Paolo Sorrentino’s most tender film yet.

A visual banquet of a film, which meditates on ageing with wit and tenderness.

Good as it looks, the film starts to feel like an airline magazine collaboratively produced by the editorial staffs of Playboy and Modern Maturity.

Michael Caine is excellent as a retired composer opposite Harvey Keitel and Jane Fonda in this strangely sweet-natured opera of pathos.

May not be as culturally specific as The Great Beauty or Sorrentino's other Italian-language films, but its universal story of how to deal with the passing of time and with changing circumstances is told with precision and tender serenity.

Quixotic, idiosyncratic, effortlessly moving, it's as much a cinematic essay as anything else, a meditation on the wonders and complications of life, an examination of what lasts, of what matters to people no matter their age.

A fountain of cinematic intoxication.